June 3 (UPI) — A hang glider pilot died after an accident during an air show at an air base in Idaho, according to the U.S. Air Force.

The pilot was injured Saturday afternoon during an act at Mountain Home Air force Base and died after being taken to a local hospital by life flight, according to a Twitter post by the Air Force.

The 366th Fighter Wing, based in Mountain Home, which is 54 miles south of Boise, identified the pilot as Dan Buchanan. Col. Joseph Kunkel told KBOI-TV he performed in the event for the last 36 years.

A witness said the hang glider pilot making steep drops trying to get to the ground.

“We didn’t realize what was happening and then he went down,” Tom Maxwell told KBOI-TV. “We continue to pray for him and his family.”

A witness told KIVI-TV that the pilot had finished a stunt with another plane but when he released the cable, he nosedived.

The Idaho Statesman reported the National Transportation Safety Board sent a team to investigate the crash.

The remainder of Saturday’s events were canceled, including a performance by the Thunderbirds.

“The collective hearts of the entire U.S. Air Force Thunderbirds are with Dan Buchanan, his family, his friends and his demonstration team,” the Thunderbirds posted on Twitter.

The 366th fighter wing posted on Twitter the air show will continue Sunday in “honor of our dear friend Dan Buchanan, and all the support he has provided for our air shows. There will be a tribute to Dan and an opportunity to memorialize him at the show.”

While getting his private pilot license when in 1981, he had a spinal injury landing a hang glider in bad weather “that he shouldn’t have even been flying in,” according to a bio on the Silver Wings of Idaho website. “Losing his ability to walk, he returned to college to pursue a career in mechanical engineering, landing him in Silicon Valley, CA.”

Buchanan, 62 and a resident of Dayton, Nev., had performed in 25-plus shows a year mainly in North American. He also had appeared in Australia, Japan, Thailand, El Salvador, the United Arab Emirates, Canada and Mexico.

Buchanan was a licensed pyrotechnician trained by Hollywood effects pros. 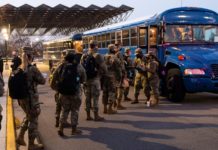 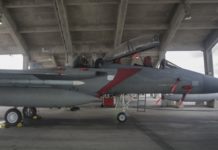 BAE awarded $58M to start production of EPAWSS for F-15s 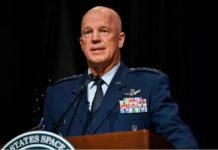