March 19 (UPI) — Harvey Weinstein was transferred to a maximum-security prison on Wednesday as he prepares to begin his 23-year sentence on rape and sexual assault convictions.

Weinstein, 67, was received at Wende Correctional Facility outside of Buffalo, N.Y., after leaving the North Infirmary Command at Rikers Island, the New York Department of Corrections said.

Officials said Weinstein will remain at the facility throughout his classification process.

“There is no standard timeframe for this process, as it varies based on the individual’s programmatic, medical and other needs,” a corrections official said.

He was convicted of first-degree criminal sex act and third-degree rape for assaults in 2013 and 2006, and acquitted on two more serious predatory counts. He faces additional charges in Los Angeles. 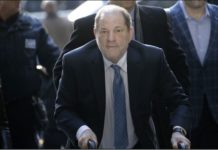