WASHINGTON, Nov. 5 (UPI) — An HIV-positive man in Colombia died with cancerous tumors originating from a dwarf tapeworm in his body, a case that baffled his doctors and scientists at the Centers for Disease Control and Prevention.

The man went to the hospital in 2013, complaining that he’d been having trouble breathing, in addition to losing weight and having an already known tapeworm infestation. Doctors at the hospital in Colombia ran tests, finding what appeared to be tumors on his lungs, which were later found in his liver and adrenal glands.

The doctors biopsied the tumors, which appeared to be normal cancer cells in many ways, but were significantly smaller and fused together, which is rare for human cells. Unsure of what they were looking at, the doctors asked the CDC to help.

“In the initial months, we wondered if this was a weird human cancer or some unusual, bizarre emerging protozoa-amoeba-like infection,” Atis Muehlenbachs, a pathologist at the CDC, told the Washington Post. “Discovering these cells had tapeworm DNA was a big surprise — a really big surprise.”

The type of infection the man had is rare, but considering the number of people who have tapeworm infestations, there is potential for a larger, unrecognized problem, Muehlenbachs said in a press release.

The dwarf tapeworm lives in the guts of about 75 million people, however generally does not cause problems for infected people, Peter Olson, a biologist at the Natural History Museum in London who helped verify the infection, told NPR. The tapeworm is the only type known to live and reproduce entirely in the human gut.

CDC researchers think the man ingested microscopic tapeworm eggs, most likely in contaminated food, and once they hatched in his already immune-compromised body, they multiplied quickly. At some point, the researchers said, as the tapeworm cells invaded his body, they proliferated as cancer rather than growing into a new worm because of a genetic mutation.

“They were dividing and proliferating out of control and that is really what defines a cancer, so they had a tape worm tumor,” Olson told the BBC.

Although scientists said they were unaware a human parasite could harbor cancer or transfer it to humans, Olson said he has published papers on two similar cases. The two cases, featuring one patient with AIDS and the other on immunosuppressive drugs for an organ transplant, both faced the same two-sided issue, a tapeworm infestation and a lowered immune system.

Both of Olson’s previous patients died and the Colombian man had been in a coma for six months when doctors figured out what was going on, and he died three days after the diagnosis.

Researchers said they have no idea how often the cancer-type illness occurs and is not diagnosed, and they remain unsure how to treat it if it can be caught in time. Drugs normally used to treat tapeworm infection may not have been effective against the worm cancer and it’s unclear whether chemotherapy would have been effective because it is not human cancer, Muehlenbachs said.

Dr. Carlos Agudelo, an infectious disease doctor who treated the Colombian man, said doctors did not have a chance to properly address his situation and possibly help him — which they’re not sure they could do for another patient either.

“He was very worried about his condition, and we didn’t have answers for him,” Agudelo said. “When he was so sick and so tired, because he had spent several months at the hospital, he dropped all his hope. I’m afraid about the treatment that we can give a patient if we discovered another.”

The study is published in the New England Journal of Medicine. 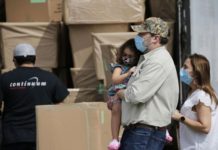