May 1 (UPI) — Acting Homeland Security Secretary Kevin McAleenan on Tuesday said his department plans to ask Congress for more money to deal with an influx of migrants along the southern border with Mexico.

Speaking to a House appropriations subcommittee, he said the funds are needed to create temporary migrant processing facilities and to pay for more workers.

“Given the scale of what we are facing, we will exhaust our resources before the end of this fiscal year,” McAleenan told lawmakers in his first testimony on Capitol Hill.

The request comes as U.S. border officials warn that the number of people who either present themselves to authorities at legal ports of entry or are detained by Border Patrol agents could reach 1 million by the end of the fiscal year in September. In March, Border Patrol agents apprehended 92,607 people, a 38 percent increase over February 2019 and a nearly three-fold increase over the same month in 2018.

Despite the increases during Trump’s first two years in office, undocumented immigration numbers are still down from figures in previous decades. Border apprehensions reached a peak of 1.6 million in 2000 and have been on a decline, reaching a low of 327,577 since then.

At Tuesday’s hearing, Rep. Debbie Wasserman Schultz, D-Fla., said she was concerned about migrants being treated inhumanely as they waited to be processed at Immigration and Customs Enforcement facilities.

“To bake them and their children in the broiling sun and not let them use the bathroom and treat them like animals rather than people is unacceptable and it must be fixed,” she said.

“The way that we are actually achieving results is when we are able to detain somebody in custody through the pendency of their immigration proceedings,” he said. “That’s what works with single adults right now, and that’s an essential aspect of what we are going to ask from Congress for families — being able to keep them together in an appropriate setting for a fair and expeditious process.”

McAleenan’s testimony came one day after President Donald Trump directed immigration officials to apply strict new regulations on migrants attempting to enter the United States. He requested that all asylum seekers are processed within 180 of filing and that they pay a fee for applications and employment permits.

“This strategic exploitation of our nation’s humanitarian programs undermines our nation’s security and sovereignty,” he said in a memorandum. 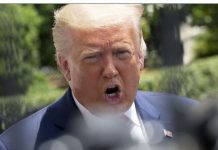