July 15 (UPI) — Tens of thousands of protesters took to the streets of Hong Kong’s northern town of Sha Tin for a peaceful march that turned violent Sunday after police attempted to disperse demonstrators from a nearby mall.

At least seven police officers and an unknown number of protesters were injured following clashes in the city where demonstrators held a march demanding the government officially withdraw a controversial extradition bill that has caused mass protests throughout the island since early June, South China Morning Post reported.

Clashes between the police and protesters broke out after the march concluded at 5 p.m. as riot police attempted to disperse the demonstrators.

The standoff in the streets of Sha Tin lasted until about 10 p.m. when some protesters left the scene, while others entered New Town Plaza, a nearby upscale mall, The New York Times reported.

Riot police then rushed the mall, hitting the protesters with batons and using pepper spray. Protesters in retaliation pelted them with umbrellas, water bottles and other items, the Hong Kong Free Press reported.

The New Town Plaza said in a statement that it did not make a police report and that no mall employees assisted law enforcement.

A government spokesman condemned the violence.

“These violent acts will not be tolerated by society,” the spokesman said in a statement.

Meanwhile, pro-democracy lawmakers condemned the actions of the police, saying they caused a panic when they stormed into the mall.

Sunday’s march follows protests in the Chinese border town of Sheung Shui that turned violent Saturday as protesters threw umbrellas and hardhats at police who in retaliation swung bats and fired pepper spray.

Protests on the island began over a month ago in demand that the government withdraw a bill that would allow some fugitives from Chinese law to be extradited to the mainland to face Beijing-controlled courts there.

Though the bill has been indefinitely shelved and Hong Kong’s Chief Executive Carrie Lam has declared it “dead,” protests persist as the movement has evolved into a wider pro-democracy cry against the bill, police brutality and other issues. 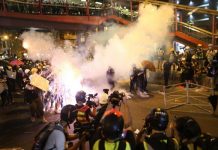 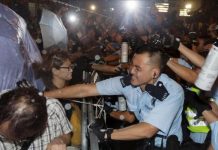