June 26 (UPI) — Hong Kong is the world’s most expensive city for expatriates, according to a new ranking of cities around the world.

Asia dominates the list of Mercer’s annual cost of living report — with Hong Kong at the top and Tokyo second, followed by Singapore in fourth, Seoul fifth, Shanghai seventh and Beijing ninth.

The survey ranked 209 cities across five continents and compared costs of more than 200 items, like housing, transportation, food and clothing.

“Stronger Chinese monetary regulation, a flourishing economy and a push to have the Chinese Yuan as an international currency pushed Chinese cities up in the ranking,” said Yvonne Traber, Mercer’s global mobility product solutions leader.

Fluctuation in Asian currencies was also cited as a reason for the Far East nations’ appearances atop the list.

Other cities with a hefty price tag on items include Seoul, which averages the most expensive coffee, Zurich for a fast food hamburger and Hong Kong for gasoline. 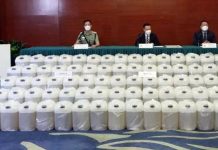