Oct. 20 (UPI) — Bone-dry Northern California will receive a series of soaking rains this week, weather forecasters said Tuesday, bringing hope that the start of this year’s Fall wildfire season will be significantly dampened.

Forecasters said an “atmospheric river” bringing moisture in from the Pacific Ocean will result in up to 5 inches of rain in some parts of the San Francisco Bay Area as much of California is experiencing driest conditions ever seen in some areas of the state.

The rain is especially welcome following two consecutive years marked by a record number of wildfires and extremely dry conditions.

The rain was expected to move onshore over parts of Northern California and the Pacific Northwest overnight Tuesday and continue into Wednesday evening before tapering off early Thursday.

Then, a second and more potent shot of rain moving along the atmospheric river is forecast to move into Northern California Sunday night, likely resulting in an additional 4-6 inches of rain — the most precipitation in nine months.

Fire officials were optimistic the rains will dramatically reduce fire danger across Northern California — perhaps ending it altogether in some places.

AccuWeather meteorologist Alex DeSilva said the storm has the potential to “be a tremendous shot in the arm due to the long-term drought in the region.” As of Oct. 12, 46% of California was in exceptional drought, the highest level of drought severity, according to data from the U.S. Drought Monitor.

Mary Eldridge, public information officer for the California Department of Forestry and Fire Protection’s unit in the Sierra Nevada foothills, said firefighters are “obviously” grateful for the rain but warned the fire danger isn’t over yet.

She told The (Nevada County, Calif.) Union that experts are “just as hopeful as everyone else” that the high fire risk will be eliminated by the rains and officials will be able to lift burn bans. 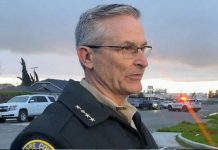