Feb. 21 (UPI) — A fire engulfed a Hilton hotel near Fort Hood in Killeen, Texas, displacing guests who sought shelter there after outages or no drinking water due to the winter storm.

The blaze occurred at the Hilton Garden Inn on O W Curry Drive, near the Killeen Mall.

Fire officials were called out to the hotel around 8:30 p.m. and said they saw flames coming from above the roof of the four-story hotel, as they arrived on scene, KWTX reported.

An automatic sprinkler system was not working because of frozen pipes, which made putting out the fire more difficult, but the crews got the fire under control just after midnight, officials said.

According to the hotel’s website, the hotel has 102 rooms, which were all in use at the time of the fire.

Two hotel guests transported themselves to a local hospital to be evaluated for smoke inhalation, and one guest was treated for minor injuries on scene, the fire department said. No firefighters had injuries.

The Salvation Army came to the scene to assist guests.

The American Red Cross was also contacted to assist them, according the fire department’s statement.

The fire department transported some of the displaced guests to the Skyline Baptist Church.

III Corps and Fort Hood said in a post on its Facebook page the guests included a few soldiers and that the fire was another “reminder to check in with each other” amid the fallout from the winter storm. 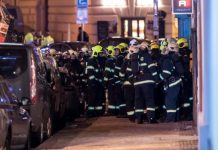