July 19 (UPI) — Lawmakers in the U.S. House of Representatives on Tuesday passed a bill to provide federal protections for same-sex and interracial marriage in the wake of last month’s Supreme Court ruling that overturned Roe vs. Wade.

The House voted 267-157 to approve the Respect for Marriage Act which seeks to codify federal recognition for same-sex marriage and strengthen other marriage-equality protections after the conservative-majority Supreme Court overturned its 1973 opinion legalizing abortion nationwide.

“Just as was the case with the immediate aftermath of the Dobbs ruling, at least 35 states already have laws or amendments in their state constitution that would outlaw same-sex marriage if Obergefell were overturned,” Rep. Jerrold Nadler, D-N.Y., said on the House floor.

“We must do everything in our power to ensure that Republican-controlled state legislatures don’t have the opportunity to restrict the rights of LGBTQ or interracial couples in America,” Nadler said.

Some Republicans called the marriage legislation a pre-election political stunt to protect rights that are not endangered.

“This bill is just another superfluous exercise. This bill is completely unnecessary,” Rep. Mike Johnson, R-La., said on the House floor.

“People have the right to live their lives the way they want,” Rep. Don Bacon, R-Neb., told Axios. Bacon said he is “inclined to want to vote for the bill,” but called it a “game vote that’s just trying to divide” Republicans.

Rep. Nancy Mace, R-S.C., explained her decision to join 46 other Republicans in voting to approve the measure in a post on Twitter.

“I’m a big fan of marriage, having done it a few times. And if gay couples want to be as happily or miserably married as straight couples, more power to them. Trust me on this,” she wrote.

Besides guaranteeing marriage equality at the federal level, the bill would also repeal the Defense of Marriage Act, known as DOMA.

The 1996 law was signed by former President Bill Clinton and defines marriage as a union between a man and a woman before the Supreme Court later ruled the Constitution guarantees same-sex marriage rights.

Despite passing the Democratic-led House Tuesday, it is not clear whether the Respect for Marriage Act will get through the Senate where the parties are split 50-50. Conservatives in the Senate are expected to argue individual states should determine their own laws on same-sex marriage.

A similar bill, currently under debate in the House, would codify federal rights to access safe birth control. The Protecting Access to Contraception Act was introduced earlier this month after Roe vs. Wade was overturned.

“As this Court may take aim at other fundamental rights, we cannot sit idly by as the hard-earned gains of the Equality movement are systematically eroded,” Nadler said. 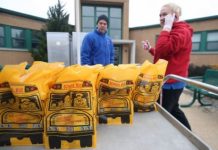