The proposals follow more than three weeks of protest in the United States that was spurred by recent police killings of George Floyd in Minnesota and other African Americans.

The House judiciary committee will convene Wednesday for what’s expected to be a marathon markup session for its Justice in Policing Act. The hearing will be followed by a vote.

The reform package includes measures to make it easier to prosecute officers in criminal and civil court, to limit the transfer of military-grade weapons and bar “no-knock” warrants in drug cases.

Senate Republicans led by Sen. Tim Scott of South Carolina will file their own reform proposal.

The GOP bill incorporates provisions in an executive order signed Tuesday by President Donald Trump that require police departments to prohibit the use of chokeholds to receive federal grants and to create a national registry to track police officers with multiple documented uses of excessive force.

The Senate bill would also set up commissions to review the criminal justice system and study conditions affecting African Americans. The measure is not expected to be taken up by the Senate until after the Fourth of July recess.

Some activists and Democratic lawmakers say Trump’s order and the expected provisions of the Senate bill fall far short of what’s necessary.

Senate Democratic leader Charles Schumer called the president’s order a “modest” response that fails to make up for his “years of inflammatory rhetoric” and policies “designed to roll back” progress.

Senate Republican leader Mitch McConnell on Tuesday criticized the House measure and said it will “go nowhere” in his chamber. He called the Justice in Policing Act a “typical Democratic overreach to try to control everything in Washington.”

“We have no interest in that,” he added.

McConnell also declared he won’t negotiate with Democrats before bringing the GOP proposal to the Senate floor for a vote. Democrats, he said, will have to decide to either to “shoot down” the Republican legislation or risk a new compromise that can get a filibuster-proof 60 votes. 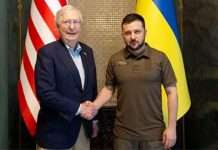