April 11 (UPI) — House Speaker Paul Ryan announced Wednesday that he will leave Congress in nine months, after the midterm elections.

The Wisconsin Republican said during a press conference that serving as speaker was “one of the two greatest honors” of his life and noted “incredible opportunities” provided by his career on Capitol Hill.

Ryan, who has three teenage children, emphasized spending time with his family as the second great honor. The speaker said that if he served another term, his children would only know him as a “weekend dad.”

Ryan said he won’t run for re-election, which means he will leave in January after the midterm elections.

“I want to be clear, I’m not done yet,” Ryan said, adding that he expects to hand the speakership to another Republican.

Ryan, 48, joins a growing list of Republicans leaving Congress. More than 30 have announced plans to leave by the beginning of 2019.

President Donald Trump reacted to the news by calling Ryan is a “good man.”

“While he will not be seeking re-election, he will leave a legacy of achievement that nobody can question,” Trump tweeted. “We are with you Paul!”

House Minority Leader Nancy Pelosi said in a statement Ryan is an “avid advocate of his point of view.”

“Despite our differences, I commend his steadfast commitment to our country. During his final months, Democrats are hopeful that he joins us to work constructively to advance better futures for all Americans.”

Rumors of Ryan’s departure had been circulating for months, even after he seemed to dismiss them late last year.

“I am not going anywhere anytime soon, and let’s just leave that thing at that,” he told reporters in December. He called the rumors “irresponsible.”

In January, Ryan said he would discuss re-election with his family before making an official decision. “That’s something that my wife and I always decide in late spring of the election year.”

Ryan has served in the House since 1999 and succeeded Ohio Rep. John Boehner as speaker in 2015.

House Majority Leader Kevin McCarthy, R-Calif., and House Majority Whip Steve Scalise, R-La., have been floated as potential successors to the speakership if Republicans keep the majority in November. 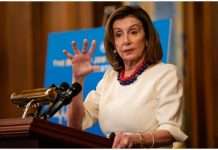