“The House will vote on Friday on [Biden’s] American Rescue Plan to end this pandemic and deliver urgently needed relief to America’s families and small businesses,” he wrote.

“The American people strongly support this bill, and we are moving swiftly to see it enacted into law.”

Biden introduced the bill last month and it includes direct stimulus payments of $1,400 to most Americans.

The funding in the bill also would hep pay for federal vaccination sites and support for schools and local and state governments.

The House budget committee passed the bill on Monday and the rules committee is expected to meet early Friday ahead of the floor vote.

While it’s all but certain to pass in the House, its passage is less assured in the Senate, where Democratic Sens. Joe Manchin of West Virginia and Kyrsten Sinema of Arizona have threatened to oppose the plan over the provision to raise the national minimum wage to $15 per hour.

Republicans have complained that the bill costs too much and the U.S. Chamber of Commerce, a nongovernmental business lobbying group, has voiced opposition to the minimum wage increase.

Biden and Democrats turned away a $618 billion compromise proposal earlier this month that was offered by some moderate Republicans. The Senate previously passed a budget resolution for the package. 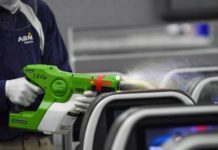