June 27 (UPI) — Permafrost is the layer of permanently frozen earth — over 3,000 feet thick in some places — that lies just beneath the land surface in Arctic regions. It formed over the past few million years when ice ages predominated.

Now, under the influence of global warming, it is melting. And research suggests that this may have reached the point of triggering runaway climate change, unless we can find ways to intervene.

The problem is that permafrost contains huge amounts of methane, a natural gas that’s being progressively released as the ice melts. Methane is a powerful greenhouse gas, having up to 80 times more warming potential than carbon dioxide.

We can’t stop this process, but could we capture the methane as it is released? It just so happens that the gas industry has the technology to do just this and join the fight against climate change.

Trouble on the tundra

Scientists working in northern Siberia announced in March that they had identified some 7,000 small hillocks created by methane that has been released underground and is pushing the ground upward. The hillocks are between 164 and 328 feet across.

In 2014, scientists also started discovering strange craters in the landscape, which appear to have been formed as a result of explosions. It seems that the pressure inside the hillocks builds up until a huge methane bubble is released with explosive force. These violent gas releases are dangerous to people and infrastructure and scientists are working on ways of estimating the local threat.

Similar mounds have been discovered in the shallow waters off the Siberian shelf, and in 1995 a drilling vessel accidentally drilled into one, releasing a vast bubble of methane that almost sank the vessel.

“Leaking pingos ‘can explode under the sea in the Arctic, as well as on land’” http://buff.ly/1XeUFVJ

These releases have global consequences. They are a massive new source of greenhouse gas, making runaway climate change more likely. And there’s something that the gas industry could do about it.

The right kind of mining

The industry is already experienced in collecting coal seam and shale gas from large numbers of widely distributed, relatively small wells. It should be possible to use the same technology to tap into these massive gas bubbles before they burst, collect the methane and transport it to market.

If this turns out not to be commercially viable, internationally funded subsidies may be needed to provide an incentive to the gas industry.

If there is no prospect at all of marketing the gas, at least it could be flared — burnt — converting methane into CO₂. This would be far better environmentally than allowing the methane to escape. But it would need to be fully funded by governments.

Petroleum companies, meanwhile, are considering mining reserves of frozen methane that lie far below the surface of the Arctic, and that are unlikely to be released by natural processes in the foreseeable future.

Any scheme to encourage gas companies to take up the challenge identified here would need to guard against this possibility.

And now the sea bed

A second type of methane release has also been discovered, coming from the Arctic seabed. The area is shallow, with an average depth of 164 feet, and was once dry land. At that time, it froze to great depth.

Now beneath the sea, it is thawing in particular spots known as taliks.

The result is that areas of the sea floor — some about 300 feet across and others up to a half-mile — are releasing streams of small methane bubbles that are rising to the surface in continuous fountains, and escaping into the atmosphere. 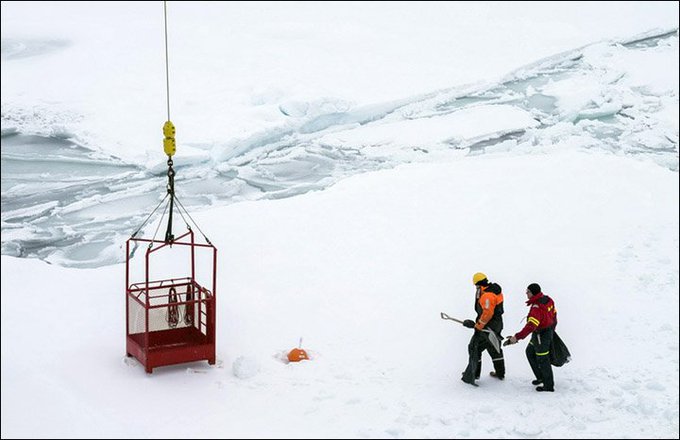 Russian scientists have been monitoring these releases for several years and their most recent research, published in late 2016 , shows that the area from which this seepage is occurring has expanded.

For the continuous fountains of methane being released from the Arctic seabed, it should be possible to place domes over the escaping gas and bring it to the surface in a controlled fashion.

The gas industry already has the technology to do this. But this technology aims to stimulate the release of methane that might not otherwise be released.

Again, this would be counterproductive from an environmental point of view. So again, if the industry were to receive a subsidy for harvesting methane in this way and transporting it to market, or at the very least flaring it, controls would need to be in place to ensure that no additional methane was being harvested beyond that which would have been released in the normal course of events.

It’s now widely believed that even if human emissions of greenhouse gases could be reduced to zero in the near future, it wouldn’t be enough to prevent catastrophic global warming. One of the additional steps we need to take is to curtail naturally occurring emissions.

Given the rate of technological change occurring in the renewable energy industry, the role of gas as a transition fuel may not last as long as the industry hopes. But if it can find a way to harvest methane escaping from the melting permafrost, it will have assured itself a longer term future.

The Paris Climate Summit envisaged developed countries finding $100 billion a year to subsidize the efforts of developing countries to reduce greenhouse emissions. If that kind of money could be found to fund the capture of Arctic methane emissions, then the projects sketched above could become feasible.

Andrew Hopkins is an emeritus professor of sociology at Australian National University.

This article was originally published on The Conversation. Read the original article.