WASHINGTON, Jan. 5 (UPI) — Some 230 million light-years from the Milky Way, two galaxies are in the process of becoming one. Recently, the Hubble Space Telescope’s Wide Field Planetary Camera 2 photographed the merger.

The action caught on film is beautiful but slow-going — so slow-going, in fact, researchers only recently realized what was going on.

Previously, NGC 6052 was classified as a single abnormal galaxy — abnormal on account of its odd shape. But astronomers eventually realized the galaxy isn’t a spaz; it is two galaxies in the midst of a collision and merger.

The collision has thrown stars in each galaxy from their original orbits. Some of the ejected stars settled into trajectories far from their birthplace, giving the hybrid galaxy a strange and sporadic hodgepodge appearance.

Eventually, the galaxy’s structure will stabilize, but scientists aren’t sure which galaxy its new form will more closely resemble. NGC 6052 might even look entirely different than the two galaxies that formed it. 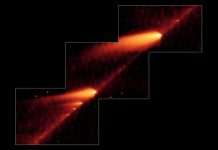