Feb. 18 (UPI) — In the 10 years since a gold-filled treasure chest purportedly was hidden in the Rocky Mountains, as many as 433,000 “chasers” have searched for it, according to a study that noted up to 2 million people have been involved at some level with the hunt.

Those numbers were higher than previous estimates given by millionaire Santa Fe, N.M., art dealer Forrest Fenn, 89, who has said he believed more than 350,000 people had searched for his supposedly hidden gold and jewels.

The study seeks to understand the psyche of amateur treasure hunters who “pursue the unattainable,” and the online communities that have built up around them, said Alan King, a psychology professor at University of North Dakota.

Fenn launched the treasure hunt Oct. 25, 2010, and the quest to find it has taken a deadly toll.

At least four people have died looking for the gold, although some authorities believe two other deaths are linked to amateur treasure hunting. Several treasure hunters, called “chasers” or “Fenners,” also had to be extricated from dangerous situations by search-and-rescue teams.

To find the gold and jewels, treasure hunters follow a cryptic set of clues released by Fenn. A 24-line poem and Fenn’s self-published memoir hint at the chest’s location somewhere in the high country between 5,000 and 10,200 feet in New Mexico, Colorado, Wyoming or Montana, Fenn has said.

One stanza of the poem reads:

Begin it where warm waters halt

And take it in the canyon down,

Not far, but too far to walk.

Put in below the home of Brown.

A decorated U.S Air Force pilot in the Vietnam war, Fenn settled his family in Santa Fe in the 1970s. He operated a successful art gallery there, with a specialty in American Indian artifacts that he collected at archaeological sites on New Mexico properties he owns. Along with his treasure-related books, he published several volumes about painters.

Fenn’s gallery was estimated to gross $6 million a year in the 1980s, according to People magazine.

Some have called the treasure a hoax, but friends of Fenn have vouched they saw the chest with their own eyes. Best-selling author Doug Preston, a Santa Fe resident, said Fenn showed it to him several times in a home vault.

“There were big gold nuggets from Alaska the size of your fist, and gold coins, Krugerrands, and some little pre-Columbian statues, including a little frog,” Preston told UPI. He said he also saw “loose gems — it was like a pirate chest.”

In 2010, Preston said, Fenn told him he’d hidden the chest. “I’ve known Forrest for 30 years; it is absolutely not a hoax,” he said. “It’s not his personality to do a hoax. I guarantee he really hid that box.”

Yellowstone National Park is a location that many chasers believe to be the treasure’s hiding spot, based on Fenn’s family trips there when he was a child growing up in Texas.

Rescuing treasure hunters is “not an epidemic” in West Yellowstone, but rescues often are made more complicated by people leaving the trails and the secrecy about their whereabouts, said Jason Jarrett, retired commander for search and rescue in Gallatin County, Mont.

“They don’t even tell their wives where they’re going. It’s weird,” he said.

“When I let them out of the car, I always say, ‘Don’t die!'” said Uber driver Carrie Arndt, who regularly picks up fares at the Bozeman, Mont., airport and drives them 250 miles to Yellowstone to search for the treasure.

Failed treasure hunters she picks up are often “angry and swearing at me,” Arndt said.

Searcher Jarrett believes at least two other deaths in the counties around Yellowstone can be attributed to Fenn’s gold treasure hunting.

Most recently, Indiana treasure hunter David Christensen was rescued Jan. 5 in Yellowstone park. Rescuers said he left the trail and rappelled halfway down an 850-foot cliff in the Grand Canyon of the Yellowstone. Christensen filed a not-guilty plea Feb. 3 in Wyoming District Court to three misdemeanor charges.

Glory of the ‘solve’

Christensen, a U.S. Army veteran who works in the fruit canning industry, told UPI he was looking for the glory of the “solve.”

“I don’t want the treasure. I just want them to say, ‘Hey this guy figured it out first,'” he said. Christensen said he was in email contact with Fenn, who advised him “wait until summer.”

Other chasers have had more serious outcomes during their hunts.

In June 2017, Illinois resident Jeff Murphy, 53, fell to his death from a 500-foot cliff in Yellowstone park. Authorities confirmed that he was searching for treasure.

Two treasure hunters drowned in the Rio Grande River while on the hunt. Retired Florida mechanic Randy Bilyeu drowned in January 2016, and Grand Junction, Colo., pastor Paris Wallace drowned in July 2017. Afterward, Fenn made an announcement that the hidden treasure was not near the Rio Grande.

Eric Ashby, 31, drowned in the Arkansas River in Colorado in June 2017 while searching for the treasure.

That year, then-New Mexico State Police Chief Pete Kassetas publicly asked Fenn to call off the hunt, but Fenn refused. Fenn has said he organized the adventure to get searchers out into nature and to enjoy the thrill of the chase.

The treasure is hidden in a location that is “not in a dangerous terrain,” Fenn has said. He has advised hunters not to go anywhere a 79-year-old or 80-year-old man couldn’t go.

“I tell people, if it’s dangerous, don’t do it,” Fenn told UPI on Monday. He said he is overwhelmed by 120 emails a day from treasure hunters.

Fenn has made more than 200 online posts. “I’ve said all I have to say,” he said. “I hid the treasure and it’s up to the searchers to go find it. I have nothing to do with it anymore.”

Psychologist King’s new research on the subculture of amateur treasure hunting shows that such hunters are numerous and some are psychologically obsessed.

Based on extrapolation from answers to about 2,000 paid online surveys, King’s research found 44 percent of respondents identified themselves as upper-middle class.

About 20 percent of active searching respondents were described as “90 percent” certain they would find the treasure. More than 50 percent of respondents said they spent $3,000 or more on the search.

About 10 percent described their involvement as a “possible addiction.” Many respondents said they took risks, including searching alone and confronting wildlife that included bears, snakes, mountain lions and bison.

Two respondents said they had been rescued and required hospitalization.

But almost 80 percent of survey respondents said they were satisfied with the experience of hunting for Fenn’s gold. Sixty-six percent said they found it educational.

“The treasure hunt itself is a fantasy, like being able to pretend you’re 6 years old again,” said Dal Neitzel, of Washington, a Fenn family friend who runs a website with clues. Neitzel said he doesn’t know where the treasure is and has been out searching for it more than 70 times.

“On the dangerous end, we have people who have spent way too much money, gone into debt and bankruptcy searching,” Neitzel said.

“Marriages have been lost over treasure hunting, but others met their spouses and got married because of the chase.”

Psychologist King compared hunting for the treasure to other seemingly impossible goals that inspire humanity.

“In my opinion, everyone should pursue at least one unattainable goal in their lifetime,” King said in an email. 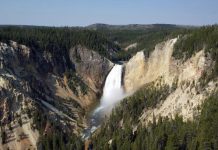 Illinois man who died in Yellowstone was looking for buried treasure, report finds