Nov. 16 (UPI) — Hundreds of people in Egypt have been stung by scorpions in recent days and hospitals are stocking anti-venom to treat them, due to bad weather that’s forced the creatures from their normal habitats and closer to humans.

Government officials said more than 500 people have been stung over the past three days in southern Egypt.

The inclement weather has included dust storms, heavy rains, hail and flooding. It has displaced the scorpions in their natural environments. The bad weather has also damaged mud-brick houses, uprooted trees and cut electricity in some areas.

Officials said that none of the weather-related deaths so far have been attributed to the scorpion stings.

Injuries caused by scorpions and snakes are somewhat common after heavy rain and dust storms in Aswan governorate, which is close to the mountains.

Many Egyptian hospitals are stocked with thousands of doses of scorpion anti-venom, the Egyptian Ministry of Health and Populations said in a Facebook post. 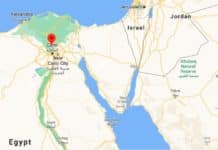