BUDAPEST, Hungary, Oct. 2 (UPI) — Hungarians overwhelmingly rejected a referendum Sunday that would demand mandatory European Union quotas for relocating migrants, but the results likely will be invalid because of low voter turnout.

Under the quota agreement, Hungary would receive 1,294 migrants seeking asylum, BBC reported. Right-wing Prime Minister Viktor Orban opposes the plan that would relocate some 160,000 migrants and said if Hungary approves the referendum he will resign.

The National Election Office said 98.3 percent of those who cast a valid vote rejected the quotas. The vote was expected to be invalid as the turnout was less than the 50 percent required (39.86 percent). The total number of eligible voters was 8,219,404.

The poll results will not be legally binding in Hungary or in the European Union.

A government spokesman said the outcome was binding “politically and legally.”

Orban, during a televised address, said he would change his nation’s constitution to make the decision binding.

During the height of the migrant crisis, Hungary became a transit state for those seeking to reach Germany and other EU destinations. To curb the influx, the country sealed its borders with Serbia and Croatia, a measure popular inside Hungary, but criticized by human rights groups.

Advertisements blew up the airwaves ahead of the referendum, showing migrants in a negative light. Posters, billboards and leaflets warned of the dangers of accepting migrants.

“We lose our European values and identity the way frogs are cooked in slowly-heating water,” Orban said Friday. “Quite simply, slowly there will be more and more Muslims, and we will no longer recognize Europe.

“What we have seen so far from the people’s migration have only been warm-up rounds. The real battle is yet to come,” he said.

Here is how the question is being posed to Hungarian citizens: “Do you want the European Union to be able to mandate the obligatory resettlement of non-Hungarian citizens into Hungary even without the approval of the National Assembly?”

“This is a piece of international PR,” said John Dalhuisen, Amnesty International’s Europe Director. “This is international marketing. He’s selling himself as the ideologue of a radically different migration policy. You’d characterize (German Chancellor Angela) Merkel as being ‘let them come’ — he’s saying the solution to the refugee crisis, to the migration issues in Europe, is ‘let no one come.'”

After casting his own ballot, Orban said, “Hungarians are aware of what is at the stake. And it’s important because it’s not about the will of the government, it’s not the intention of the parliament. It’s the voice and will of the people that’s most important.”

When asked whether he’d resign over a “Yes” vote, Orban said he would. 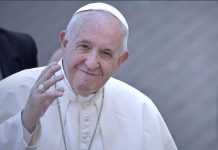