Thousands of homes along the storm’s path sustained heavy damage.

A photograph taken by satellite start-up Iceye estimated some 60 percent of the Grand Bahama Island was submerged Monday from heavy rain and the powerful storm surge when the Category 5 hurricane arrived.

“We are in the midst of one of the greatest national crises in our country’s history,” Bahamian Prime Minister Hubert Minis said Tuesday. “It is going to require a massive coordinated effort to rebuild.”

Journalist Tim Aylen shared video of his family’s escape in waist-high waters that flooded their home in Freeport.

“The water rose within two minutes in the house and was up to (the) windows,” Aylen said. “We thought about attic trap. Roof-no way safe. We found dry land.” 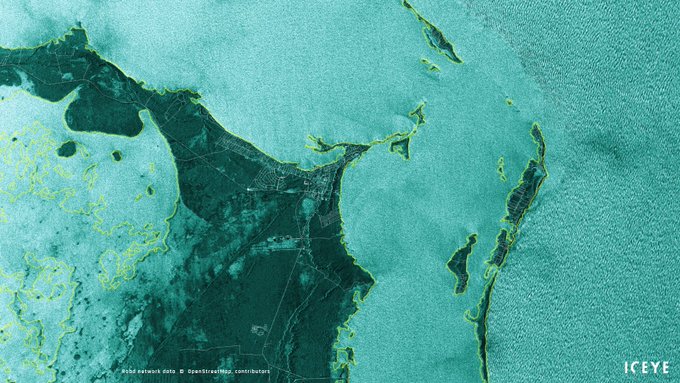 48 people are talking about this

Tip Burrows, director at the Humane Society of Grand Bahama, said flooding trapped crew and animals at its shelter. Five workers, 200 dogs and 100 cats were on site when it started to take on water. Burrows said she’d lost contact with the crews.

“The shelter is underwater,” Burrows said. “Everything is flooded. This is devastating and heartbreaking and I don’t know if any [animals] survived. We’re just trying to get the staff out. I know there are a lot of people all over the island needing rescue. Hopefully, they can hang on, but they are running low on battery.”

Bahamas Agriculture Minister Michael Pintard said his family were forced to the second floor of their home near the Grand Lucayan waterway after water started to flow in.

“I think we must be at least 15 feet above sea level and then furthermore for the water to grow inside to pretty much the top of my door — it’s incredible,” Pintard tweeted.

“It really reaffirms, because I’ve always known [material] things are tertiary, on many levels, family is so crucial and people you care about. I think about my neighbors and I’m praying to God they are fine because a lot of them had single-story homes.”

Abaco and Grand Bahama Islands took in 30 inches of rain and a storm surge as high as 23 feet during Dorian. The Red Cross reported more than 13,000 houses, almost 50 percent of the homes on the two islands, suffered damaged or were destroyed.