Sept. 18 (UPI) — Maria strengthened from a tropical storm to a Category 5 hurricane in just over a day, the National Hurricane Center said Monday.

In its 8 p.m. advisory, forecasters said the storm was located about 15 miles east-southeast of Dominica and 40 miles north of Martinique. It had winds of 160 mph, a 30 mph increase from the NHC’s 5 p.m. advisory.

Maria was moving west-northwest at a speed of 9 mph.

After passing through the Leeward Islands, the storm is forecast to move over the extreme northeastern Caribbean Sea on Tuesday and approach Puerto Rico and the Virgin Islands on Wednesday.

Several islands battered by Hurricane Irma earlier this month were under hurricane advisories. In the latest NHC update, Martinique’s hurricane warning was downgraded to a tropical storm warning.

A hurricane warning was in effect for the U.S. Virgin Islands, the British Virgin Islands, Guadeloupe, Dominica, St. Kitts, Nevis, Montserrat, Puerto Rico, Vieques and Culebra. Hurricane watches have been issued for Saba and St. Eustatius, St. Maarten, St. Martin and St. Barthelemy, Anguilla, and from Isla Saona to Puerto Plata in the Dominican Republic.

There was a tropical storm warning for St. Lucia, Martinique, Antigua and Barbuda, Saba and St. Eustatius, St. Maarten and Anguilla, and a tropical storm watch for St. Vincent, the Grenadines and west of Puerto Plata in the Dominican Republic north to the border with Haiti.

“On the forecast track, the core of Maria will move near Dominica and the adjacent Leeward Islands during the next few hours, over the extreme northeastern Caribbean Sea the remainder of tonight and Tuesday, and approach Puerto Rico and the Virgin Islands Tuesday night and Wednesday,” the NHC said.

So far, Maria is following a similar path that Irma traveled — west-northwest through the Caribbean. Monday, forecasters expected Maria will ultimately turn sharply north, and potentially threaten the middle of the U.S. East Coast.

Rain accumulations of 6 to 12 inches, with isolated maximum amounts of 20 inches, are forecast across the Leeward Islands, including Puerto Rico, as well as the U.S. and British Virgin Islands — where residents had just started to return after evacuating for Irma — through Wednesday night. 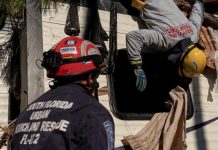 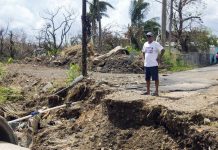