NEW DELHI, Oct. 9 (UPI) — India’s Foreign Ministry issued a complaint to Saudi Arabia over the alleged amputation of an Indian woman’s arm by her Saudi employer.

Kashturi Munirathinam’s right arm was cut off last week when she allegedly attempted to escape a Riyadh, Saudi Arabia, home where she had been employed for three months as a maid. The woman’s family in Chennai, India, said Friday the 58-year-old wanted to escape her employers because they allegedly harassed her.

The victim, who has been hospitalized, told local police she was mistreated, unpaid and not provided enough food, her sister said.

“This is unacceptable. We have taken this up with Saudi authorities,” said Indian Foreign Minister Sushma Swaraj in a Twitter message.

“We are aware of the plight of Ms. Kashturi Munirathinam, a domestic help who has suffered serious injuries allegedly inflicted by her Saudi Arabian sponsor,” Indian External Affairs spokesman Vikas Swarup said in a statement Thursday night. “This is a very unfortunate and most condemnable incident. Our embassy in Riyadh has taken up the matter with the Saudi Foreign Office and asked for strict action in the matter and severe punishment for the sponsor. We will continue to seek justice for the victim.”

India also demanded an independent investigation and called for the unidentified assailant to be charged with attempted murder.

Saudi Arabia has faced criticized for treatment of workers from other countries. Anecdotal reports regularly emerge of abuse of maids and other domestic workers.

Indonesia banned its citizens from working as domestics in 21 countries, including Saudi Arabia, and Sri Lanka placed limits on the number of its citizens working in Saudi Arabia after a 17-year-old Sri Lankan girl was convicted of killing her employer’s infant son and beheaded. 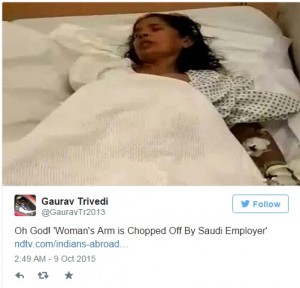