BUNKER HILL, Ind., Dec. 15 (UPI) — After years of squabbles between the Bunker Hill town council and the city’s police department, the entire department quit this week, saying they’ve been mistreated and asked by council members “to do illegal, unethical, and immoral things.”

Former Bunker Hill Town Marshal Michael Thomison and the department’s four volunteer reserve deputies resigned on Dec. 12, accusing members of the council of forcing them to share one set of body armor, threatening officers when they refused to run background checks on other members of the council and of cutting Thomison’s health insurance after he was treated for cancer because it was too expensive.

The mass resignation follows two other volunteer reserve deputies who quit in November, and leaves the town of 900 without a police force.

“We have had issues with the town board, and there are some activities there where I felt like they were serving their own agenda,” Thomison said.

Council members denied the accusations in a statement on Dec. 14, acknowledging only that they had made budget cuts because of a lack of funds and had no other choice.

“The council admits that it had made a number of cuts to the police department over the last few years. This was a decision the town made due to a lack of funding,” the council said in the statement. “Bunker Hill is diligently working to solve this problem for the coming year. The cuts made to the police department were not made with the intention of jeopardizing the safety of any of the town’s police officers.”

Thomison said the department and town council have battled for years over funding, which has slowly shrunk because of what council members call budget issues.

Among the dangers this has caused, Thomison and the deputies allege, is the department has just one set of body armor, which Thomison would take off and give to deputies when they went out on patrol or to serve warrants. State law, Thomison said, requires municipalities to provide the armor to officers.

Thomison also said the resignation went beyond professional problems. The marshal was treated for cancer last year, and when he came back to work in May the council told him he would only be working part time so the town would no longer have to provide him insurance

“They came at me and said it is costing the town way too much money because of my insurance, and they said we are taking you down to part time,” Thomison said.

The deputies say they discussed whether or not to quit for a month, and did not want to do so, but felt they had no other choice under the circumstances.

“The resignation of the entire police force has come as a shock to the council,” the council said. “It has never been the goal to dismantle or otherwise endanger the town police department or officers. The council thanks these officers for their service to the town.”

Council members asked residents for patience while they work to hire a new marshal and deputies. In the meantime, state and county police will patrol the town. 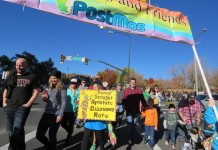