Petroperu, which owns a pipeline built nearly 50 years ago that native organizations and human right groups say is improperly maintained and causes constant spills, said 60 of its employees and contractors need to be evacuated from the site.

Petroperu said the indigenous residents have created “a situation of tension and danger in the area.” The state oil company asked for authorities’ help “to reestablish social order, safeguard the integrity of company personnel and protect” the pipeline infrastructure.

As in several previous occasions, Petroperu reiterated that it suspended the pipeline’s operation because “sabotage” caused an oil spill.

It blamed the alleged sabotage on the indigenous community of Mayuriaga, which the company said is also preventing repair works so that crude continues to be spilled “with great risk for the environment and health of nearby communities.”

Meantime, the Chapis community published a statement on Thursday available through the Aidesep organization, which is an association of more than 1,800 native populations living in the Peruvian rainforest.

In the statement, the community said it wants the central government to take actions and listed a series of demands, including changing the north branch of the pipeline, financing medical studies for all affected communities and stopping attempts to try to present the native protests as a criminal act.

The indigenous population also wants public institutions such as a police station and a agriculture agency to be installed in areas frequently affected by pipeline spills. They also want compensation for damages.

“We demand the Peruvian state to protect against attacks to the environment and to help the health of the human people, and to guarantee life and development in acceptable conditions, for the populations living alongside the north branch of the pipeline,” the statement said.

Luis Hallazi, a human rights activist in Peru, told UPI in late October that the nation’s government was failing to assure the rights of indigenous communities to clean land and water because of constant oil spills. He cited improper management of a Petroperu-owned pipeline for the spills.

“There have been thousands barrels of crude oil spilled that have altered the lifestyle and health of communities,” he said. After analyzing instances of spills, human rights organizers have determined Petroperu’s claims of sabotage were not credible, Hallazi said.

Petroperu is a state-owned agency that does not produce crude oil, nor own any network of fuel stations. Its best-refining assets were previously sold, leaving it with about 85,000 barrels per day of refining capacity.

The pipeline it owns is used to transport oil produced by a private company that now owns the former Petroperu production assets, sold in a state asset sale process started in the 1990s. Because the private company does not own the pipeline, it is able to skirt responsibility for the spills, as well as the pipeline’s general upkeep. 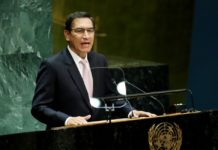 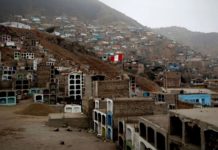