Jan. 24 (UPI) — Indonesia’s special forces showed off their skills — including drinking blood from decapitated snakes and breaking flaming bricks — for U.S. Defense Secretary James Mattis during his visit to Jakarta on Wednesday.

The demonstration came as Mattis seeks to expand military and counterterrorism cooperation with Indonesia.

The U.S. Defense chief looked on as camouflaged men wearing war paint took part in elaborate and at-times dangerous feats of strength and skill. Some of the soldiers decapitated snakes, including at least one king cobra, and drank their blood. One man bit the head off one of the snakes.

Others broke stacks of flaming bricks, while even a group of specially trained German Shepherd dogs got in on the action, descending from helicopters in a hostage rescue drill.

One blindfolded commando finely sliced a cucumber held in the mouth of another soldier, while others rolled in broken glass, laid on a bed of nails and leapt through fire.

One man appeared to be injured during a demonstration in which he was shot as he held a red balloon above his head for a comrade to shoot with a pellet gun.

Mattis appeared entertained by the spectacle.

“When you watch a force do that many small things perfectly, you can imagine they can put the bigger issues together,” he later told reporters. “I had to wonder about the guy in the truck.”

The special forces unit that put on the demonstration is known as Kopassus, The Washington Post reported. The United States in 1999 barred the team from working with U.S. forces because of human-rights abuses under the Leahy Law.

They are accused of involvement in massacres in East Timor, disappearing student pro-democracy activists and torture in Aceh.

“One of the sanctions is clearly that they are not allowed to go to America. They can’t do training together, and he will reopen this,” Indonesian Defense Minister Ryamizard Ryacudu said after meeting with Mattis.

Mattis said he believes Kopassus has been reformed and would stand up to scrutiny under the Leahy Law. 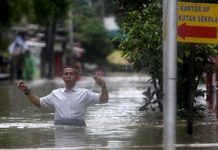 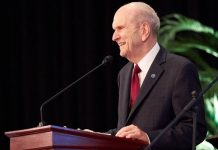 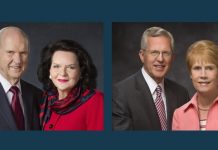