Feb. 6 (UPI) — Inmates at a downtown St. Louis jail smashed through fourth floor windows and set fires Saturday in the third riot since December amid concerns about conditions, officials said.

The riot broke out at about 2:30 a.m. after a guard scuffling with an inmate was attacked by other inmates at the City Justice Center downtown, authorities said.

After the scuffle, more than 100 inmates set fires on the fourth floor, flooded floors and clogged toilets, said Jacob Long, a spokesman for the mayor.

All inmates were “back in custody,” shortly before 10 a.m. after officers used tear gas to regain control, according to Long.

The officer involved in the fight was injured and taken to the hospital and was believed to be in good condition. No other officers or inmates were injured, Jimmie Edwards, director of the city’s Department of Public Safety, told reporters in a news conference.

Edwards added there has been an issue with detainees in certain units having an ability to “jimmy their locks,” which allowed them to get out of their cells, and those units were cleared Saturday morning.

Fifty-five of the men from those units have been moved to a segregation unit where there’s “better control and a locking system that is a maximum security locking system,” Edwards said.

Authorities transferred about 65 “of the most violent offenders” to a Medium Security Institution, that is a more secure facility than CJC, Edwards added.

The riot was the third in recent weeks, with two occurring toward the end of December by inmates who voiced concern about unsafe conditions amid the COVID-19 pandemic.

“This time, no reason was given,” Edwards said.

“This was not a situation where there were any demands being made by anyone,” Edwards told reporters.

“These were just very angry, defiant, very violent people that we house at the Justice Center,” he continued, adding that people housed in the units were there for “very serious offenses.”

The CJC has set up a COVID-19 protocol.

“This was not an attempt to break out of jail. This is certainly not a situation involving COVID. We have zero COVID cases at CJC,” Edwards said during the news conference. “This was a bunch of folk who were defiant. This was a bunch of folk who decided they were going to engage in criminal mayhem. And that’s exactly what they did and they should be held accountable for what they did.”

Missouri state Rep. Rasheen Aldridge, who represents the 78th District in St. Louis, was skeptical that there were no inmate demands in his statement on the incident on Twitter.

“The only way you could believe that the inmates have no demands is by continuing to ignore them,” Aldridge said in statement on Twitter. “What [Martin Luther King Jr.] said was true when he talked about riots being the language of the unheard. These inmates have been ignored for 2 months, how much longer will they go unheard?” 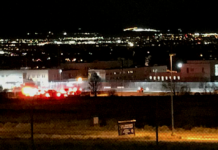