Aug. 26 (UPI) — Iran dispatched a destroyer and helicopter carrier to the Gulf of Aden to protect its trade ships, a senior Iranian military official announced on Monday.

The Sahand, built in Iran and launched in 2018, is regarded as the most advanced warship in Iran’s navy. It is equipped with anti-aircraft artillery, torpedoes and surface-to-surface missiles.

The United States has sought to to assemble a coalition to protect shipping in the area following attacks in May and June on oil tankers.

The United States has also increased its presence in the region with a carrier strike force led by the aircraft carrier USS Abraham Lincoln.

The strategically-located Gulf of Aden is a deep-water gulf with Yemen to the north, the Arabian Sea to the east, Somalia to the south, and Djibouti to the west. It connects with the Red Sea and the Indian Ocean, separating the Arabian peninsula from the Horn of Africa. 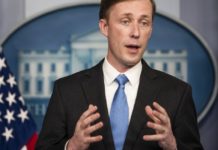