Jan. 12 (UPI) — Kimia Alizadeh, who has been Iran’s only woman to win a medal at the Olympics, said she has defected from the country and moved to Europe in a social media post that is critical of the regime’s government.

Alizadeh, 21, made the announcement Saturday in Arabic to her 370,000 Instagram followers. The 11-paragraph post didn’t say what country she moved to though she said she wants to continue practicing the martial arts sports, and to live a “happy and healthy life.”

Alizadeh won the bronze in the 125.7-pound taekwondo category at the 2016 Olympics in Rio de Janeiro, Brazil. In all, Iran has won 69 medals in the Summer Games since its debut in 1900 and none in the Winter Games, according to the Olympian Database.

“Let me start with a greeting, a farewell or condolences,” she wrote. “I am one of the millions of oppressed women in Iran who they have been playing with for years.”

Alizadeh added: “They took me wherever they wanted. I wore whatever they said. Every sentence they ordered me to say, I repeated. Whenever they saw fit, they exploited me.

“I wasn’t important to them. None of us mattered to them, we were tools.

Though the government celebrated her medals, it criticized the sport, she said,

“The virtue of a woman is not to stretch her legs!” Alizadeh, known as “The Tsunami,” wrote.

On Friday, Seyed Mohammad Pouladgar, the head of Iran’s Taekwondo Federation, said Alizadeh had assured her father and her coach that she was traveling on vacation at Iranian government expense despite rumors of her departure.

Her defection comes amid anti-government protests in cities across the nation Saturday. Iran earlier Saturday had admitted it had accidentally shot down a Ukrainian passenger airliner, killing all 176 people aboard, on Wednesday. One week earlier, a U.S. airstrike killed Iranian Gen. Qassem Soleimani and subsequently Iran struck bases in Iraq that houses U.S. troops through there were no casualties.

Alizadeh said she “didn’t want to sit at the table of hypocrisy, lies, injustice and flattery,” including being complicit with the regime’s “corruption and lies.”

“My troubled spirit does not fit with your dirty economic ties and tight political lobbies,” she wrote.

During the 2016 Olympics, Alizadeh wore a traditional head scarf along with her taekwondo uniform. The 2020 Olympics is in July in Japan.

‘She has defected for a life of security, happiness, and freedom. Iran will continue to lose more strong women unless it learns to empower and support them,” U.S. State Department spokeswoman Morgan Ortagus posted on Twitter. 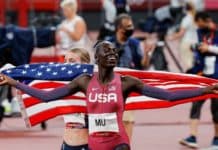