The New York Times reported the arrests were part of sting carried out by Iraqi and U.S. intelligence. Rudaw reported the Kurdish-led Syrian Democratic Forces also were involved in the cross-border operation.

Among those captured Wednesday were four Iraqis and one Syrian — one of them was identified as Saddam Omar Hussein, who had previously been reported killed. Iraq’s Central Investigative Court interrogated Hussein under the “direct supervision” of Iraqi Prime Minister Haider al-Abadi. 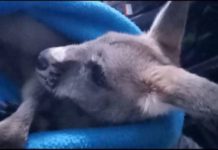