May 24 (UPI) — An Iraqi citizen with suspected ties to the Islamic State was arrested in Ohio and charged with a plot to kill former President George W. Bush, the Justice Department announced Tuesday.

Shihab Ahmed Shihab Shihab, 52, appeared in federal court in Columbus on Tuesday, and was charged with an immigration crime, as well as aiding and abetting a plot to murder Bush.

Prosecutors with the U.S. Attorney’s Office in the Southern District of Ohio said Shihab planned to smuggle four Iraqi nationals into the United States to assist in the plot to kill Bush “in retaliation if Iraqi deaths during ‘Operation Iraqi Freedom.'”

They said Shihab then planned to smuggle the four Iraqis back out of the country through the U.S.-Mexican border after the planned assassination.

“In furtherance of the assassination plot, Shihab allegedly traveled to Dallas in February 2022 to conduct surveillance of locations associated with the former president,” the U.S. Attorney’s Office said in a news release.

“In March 2022, it is alleged Shihab met with others in a hotel room in Columbus, Ohio, to look at sample firearms and law enforcement uniforms.”

Two law enforcement officials told the The Columbus Dispatch that Bush was never in any danger.

“President Bush has all the confidence in the world in the United States Secret Service and our law enforcement and intelligence communities,” said Bush’s former chief of staff, Freddy Ford.

Additionally, prosecutors said Shihab intended to help bring another Iraqi citizen into the United States for a $40,000 fee in August 2021. The alleged smuggling involved a fictitious person, and it was coordinated by the FBI. Shihab allegedly accepted tens of thousands of dollars for the purported scheme.

Shihab entered the United States in September 2020 on a visitor’s visa and applied for asylum in March 2021. His application was under review.

He has lived in Columbus and Indianapolis since entering the United States. 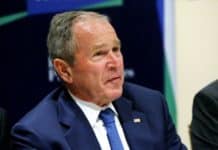