Nov. 8 (UPI) — Iraqi Prime Minister Mustafa Al-Kadhimi called for “calm and restraint from everyone” after he survived an assassination attempt Sunday from an explosive-laden drone.

“Thank God, I am fine and among my people,” he posted on Twitter.

Security forces were “taking the necessary measures in connection with this failed attempt,” the military said.

“I was and still am a redemption project for Iraq and the people of Iraq,” Al-Kadhimi tweeted. “The missiles of treachery will not discourage the believers and will shake a hair of the stability and determination of our heroic security forces to preserve people’s security, achieve justice and set the law in place.”

On Sunday morning, he had just returned from overseeing security forces engaged in a stand-off with protesters at the southern gate of the Green Zone, which is the heavily fortified area of Baghdad.

A booby-trapped drone targeted a location near his residence, wounding a few of his guards and causing minor damage, a source told CNN.

No one has claimed responsibility for the drone attack. On Friday, one person died and dozens were wounded after supporters of Iran-backed militias clashed with Iraqi security forces near the Green Zone, health officials told CNN.

Nechirvan Barani, the president of the Kurdish Regional Government, called the failed assassination attempt a “terrorist act” that “threatens security and stability in the country and portends dire consequences.”

Kurdish Regional Government is the semi-autonomous region in northern Iraq.

“I invite everyone to exercise restraint and calm down,” Barani said.

“This apparent act of terrorism, which we strongly condemn, was directed at the heart of the Iraqi state,” U.S. State Department spokesman Ned Price said in a statement. “We are in close touch with the Iraqi security forces charged with upholding Iraq’s sovereignty and independence and have offered our assistance as they investigate this attack. Our commitment to our Iraqi partners is unshakeable. The United States stands with the government and people of Iraq.”

In last month’s parliamentary elections, lawmakers backed by the influential Shiite cleric Moqtada al-Sadr came first in the vote. Al-Kadhimi, an independent, is seeking support from Sadr and other blocs to be reinstated as premier.

The Shiite militias are backed by Iran.

Iran, which condemned the attack, pledged to continue its “support for stability, security and peace in Iraq,” according to a statement by Saeed Khatibzadeh, spokesman for the foreign ministry.

Al-Kadhimi, 54, became prime minister on May 6, 2020, after serving as Iraq’s former intelligence chief. 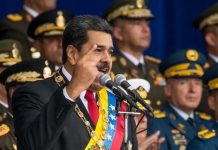 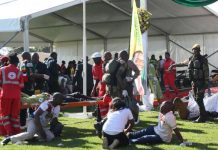 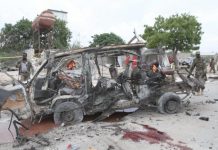