March 10 (UPI) — Officials say they believe Islamic State leader Abu Bakr al-Baghdadi fled Mosul as Iraqi security forces advanced on the city and is now hiding out in the desert.

The officials said Baghdadi likely left operational commanders behind in Mosul who will battle for control against Iraqi security forces. Baghdadi, one of the most wanted men in the world, is thought to be in familiar Iraqi desert villages living among sympathetic civilians.

The U.S. Department of State is offering a reward of up to $25 million for information leading to Baghdadi’s location, arrest or conviction.

Iraqi and U.S. intelligence sources said the lack of official communication from the Islamic State’s leadership in Mosul, and the loss of territory, suggest Baghdadi left the city.

Baghdadi has not released a recorded speech since early November.

Iraq launched its military offensive to retake western Mosul from the Islamic State on Feb. 19. The offensive to retake Mosul began Oct. 17, led by Iraqi security forces and aided by the Kurdish Peshmerga, a Shiite-led militia, and the U.S.-led international coalition. Iraq captured all of east Mosul in late January.

Iraqi forces said they are in control of at least 10 of western Mosul’s districts and are closing in on the Noor mosque, where Baghdadi is believed to have delivered a sermon in which he declared the Islamic State caliphate. 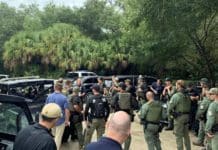