BEIJING, Dec. 8 (UPI) — The Islamic State has released a propaganda song in the Mandarin language calling for China’s Muslim men to “wake up” and “take up weapons in rebellion.”

The four-minute song was released Sunday by the Islamic State’s media branch, the Al-Hayat Media Center, two weeks after the militant Islamist group’s first documented execution of a Chinese hostage.

The Islamic State is known for its highly-produced media material, including high-quality recruitment and execution videos. The latest song is similar to other IS chants, also called nasheeds.

The song does not call for an attack on a specific target. The Islamic State’s nasheeds are sung mostly a cappella, as the group’s strict interpretation of Islamic law forbids musical instruments. Although no instruments are used, post-production techniques similar to auto-tune are clearly audible.

China’s Foreign Ministry spokeswoman Hua Chunying on Monday said she was not aware of the song, but hopes China “can safeguard the citizens of every country through international cooperation.”

Below are a few sample lyrics of the song translated into English. Mujahid means a person engaged in jihad, particularly as a guerrilla warrior:

“We are Mujahid, our shameless enemy panics before us. To die fighting on this battlefield is our dream.

Wake up! Muslim brother, now is the time to awaken. Take up your faith and courage, fulfill the lost doctrine.

No power can stop our progress. To take up weapons in rebellion is Muhammad’s order.

To fight against those who fight you is Great Allah’s command. To take up weapons in rebellion is Prophet Muhammad’s order.

We are Mujahid, our shameless enemy panics before us To die fighting on this battlefield is our dream.”

China: Balloon in U.S. airspace is civilian weather airship that blew off course 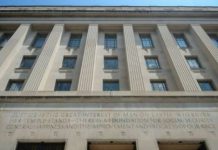