CAESAREA, Israel, May 17 (UPI) — Israeli divers discovered a treasure trove of valuable statues and coins beneath the ocean’s surface recently, which had apparently been sitting on the sea floor for 1,600 years, researchers said.

The Israel Antiquities Authority said the discovery was made a few weeks ago in the ancient harbor of Caesarea in the eastern Mediterranean, off the Israeli coast.

It’s believed the treasure went down with a Roman-era ship. Amazingly, the IAA said, some of the treasures still look brand new — thanks to their preservation by the sea.

“The sand protected the statues; consequently they are in an amazing state of preservation – as though they were cast yesterday rather than 1,600 years ago,” Jacob Sharvit, director of the Marine Archaeology Unit of the Israel Antiquities Authority, and Dror Planer, deputy director of the unit, said in a statement.

“These are extremely exciting finds, which apart from their extraordinary beauty, are of historical significance,” they added.

“The location and distribution of the ancient finds on the seabed indicate that a large merchant ship was carrying a cargo of metal slated recycling, which apparently encountered a storm at the entrance to the harbor and drifted until it smashed into the seawall and the rocks”

The scientists said it appears the old artifacts were being carried by a merchant ship, and were being transported for recycling, when the vessel sank.

“A preliminary study of the iron anchors suggests there was an attempt to stop the drifting vessel before it reached shore by casting anchors into the sea,” they said. “However, these broke — evidence of the power of the waves and the wind which the ship was caught up in.”

In addition to the priceless bronze statues, divers also discovered a variety of ancient Roman coins.

Archaeologists said the find is the most significant by Israel in more than three decades. Last year, a number of gold coins stamped in Arabic were found off Caesarea. They are now on public display. 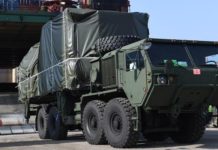