Sept. 17 (UPI) — An election re-run in Israel Tuesday shows Prime Minister Benjamin Netanyahu is in a dead heat with challenger Benny Gantz — in a race that could end up significantly changing the nation’s political landscape.

Tuesday’s vote was ordered in May after Netanyahu failed to form a coalition government. Voters will fill seats in the 120-seat legislative body, with a simple majority of 61 required to pass laws and achieve other governmental tasks. For weeks, Netanyahu has been campaigning against several candidates looking to take his place as prime minister.

Several polling stations in Israel were closed temporarily because of various illegal activity, officials said. One in Umm al-Fahm closed after an election observer was seen attempting to film activity.

Police said the observer was replaced and the ballot re-opened without incident.

Three polling stations in Yarka closed after reports of voters attempting to cast more than one ballot, and some trying to vote under another name.

There have also been multiple reports of polling irregularities.

Netanyahu said there have been attempts by his opponents to steal the election. His Likud Party focused its investigation on Arab areas where he faces the most opposition.

The Likud and Blue and White parties will go at it again Tuesday, with the winning party’s leader designated prime minister. The other parties and their leaders on the ballot are:

In the April vote, Deri’s and Litzman’s parties each won eight seats in Parliament, and Odeh’s and Gabbay’s six. Lieberman’s and Peretz’s won five and the remaining three won four.

Issues influenced by the election

Netanyahu promised this month that should he win again, he will annex the Jordan Valley and the northern Dead Sea — a pledge that has drawn considerable criticism, particularly from Palestinian leaders as much of the territory in the areas is Palestinian.

Also, the Trump administration has promised to unveil its full Mideast peace plan after Tuesday’s vote — which Netanyahu said will provide him a “historic opportunity” to extend Israeli sovereignty over the West Bank.

White House adviser Jared Kushner and Jason Greenblatt have been two of the lead designers of the U.S. plan. Greenblatt announced earlier this month he’s leaving the administration to return to the private sector.

Trump and Netanyahu spoke by phone last weekend and also discussed the possibility of a mutual defense treaty.

Michigan Rep. Ilhan Omar, a longtime critic of Netanyahu, said over the weekend she hopes that Israeli voters recognize the contradictory nature of his policies and rhetoric.

Should he fail to win re-election Tuesday, Netanyahu faces potential legal consequences — over accusations of fraud, bribery and breach of trust from three former confidants. Up to this point, he has dismissed investigations into the purported misconduct as “a terrible witch hunt” — but being unseated as prime minister would open him to potential prosecution.

Netanyahu held an emergency meeting recently with the head of Israel’s Central Elections Committee on election security amid reports he was concerned about alleged election irregularities in the Arab sector.

After the polls close Tuesday and a winner is chosen, he will have 42 days to form a coalition government. 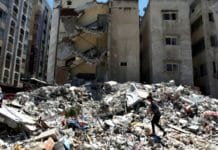