Knox and her ex-boyfriend, Raffaele Sollecito, were acquitted of the murder on March 28 after the two were convicted, acquitted, then convicted again.

The report issued by the appeals court explaining its decision to acquit the two for a second time said police and prosecutors displayed “stunning weakness” and “no shortage of glaring errors” in the investigation of the case. For instance, no biological evidence from Knox or Sollecito was found at the site of Kercher’s death.

The court thinks this alone should have excluded the two suspects from the case, because the third person arrested, Rudy Guede, left “copious” biological traces at the scene. The court adds that the media frenzy surrounding the defendants negatively impacted the investigation and made it “spasmodic.”

On her website, Knox said she was “deeply grateful” for the court’s decision.

“I will now begin the rest of my life with one of my goals being to help others who have been wrongfully accused,” Knox wrote.

Sollecito told an Italian news agency that he was the victim of a gross “miscarriage of justice” that is now the subject of a claim for wrongful imprisonment. 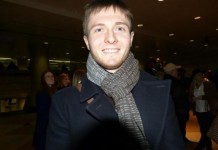