Sept. 5 (UPI) — Jacob Blake, a 29-year-old man shot and paralyzed by Kenosha, Wis., police last month, pleaded not guilty Friday to charges related to an alleged domestic assault in May.

It was his first court appearance since he was hospitalized with several gunshot wounds Aug. 23. He entered the plea from his bed at Froedtert Hospital in Milwaukee.

The charges included third-degree sexual assault, criminal trespass and disorderly conduct. A judge set a signature bond of $10,000 and scheduled a Nov. 9 trial.

Blake’s Aug. 23 arrest and shooting prompted weeks of protests in the southeastern Wisconsin city, resulting, at times, in vandalism and violence, including the shooting deaths of two protesters by a self-described militia member.

Kenosha police shot Blake after they were called to a residence for what they described as a domestic incident on Aug. 23. Officials said the female caller described Blake as her boyfriend and that he’d taken her keys and refused to return them. She also allegedly said he wasn’t allowed at the residence.

Witnesses said Blake tried to intervene with a group of women who were arguing outside the residence when police arrived.

Police then used Tasers on him, but he allegedly fought with police, causing them to draw their guns. On a bystander video, Blake can be seen attempting to enter the driver’s side of his vehicle when officer Rusten Sheskey grabbed the back of his shirt, firing seven times.

Blake’s three children were in the vehicle at the time of the shooting.

Officials said a knife was found on the floorboard of Blake’s vehicle and one of the bystanders who filmed the encounter said he heard officers repeatedly yell “Drop the knife!” 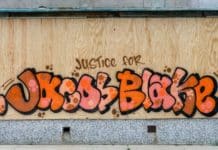