Sept. 18 (UPI) — The Jamaican government this week announced a ban on plastic bags, straws and polystyrene foam set to take effect on Jan. 1, 2019, becoming the latest nation to strongly restrict the use of single-use products known to have ill effects on the environment.

Daryl Vaz, Jamaica’s Minister without Portfolio in the Ministry of Economic Growth and Job Creation, said the move is part of an international effort to reduce pollution that has plagued the island nation in recent years.

“We’re moving towards a ban on single-use plastic, but while we do so, we’re also working on a Plastic Minimisation Project in collaboration with United Nations Environment, and with the support of the Government of Japan, to reduce and manage plastic marine litter from the land-based activities, in an environmentally sound matter,” he said, according to the Jamaica Observer.

The ban on plastic bags will include a ban on the importation, manufacturing and distribution of single-use plastic bags with dimensions at or below 24 inches by 24 inches.

Exceptions to the ban will include bags “utilized to maintain public health or food safety standards,” such as bags used to package raw meats, flour, rice and other foods commonly transported in smaller bags.

“Consumers are being encouraged to use reusable carrier bags, particularly by local enterprises,” the government advisory said.

Polystyrene foam, most commonly referred to as Styrofoam, will also be banned except for the packaging of some food items.

Local manufacturers of polystyrene foam will have until January 1, 2021 before they must stop production.

The ban on plastic drinking straws will include a ban on straws attached to drink boxes and pouches.

Straw exceptions will be made for the medical community when plastic alternatives are not viable. 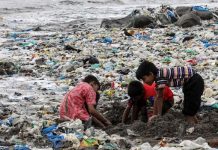