Sept. 30 (UPI) — The House select committee investigating the Jan. 6 siege on the U.S. Capitol building issued 11 subpoenas on Wednesday to allies of former President Donald Trump who were involved in organizing the “Stop the Steal” rally held prior to the attack occurring in Washington, D.C.

The subpoenas were issued to members and those affiliated with the Women for America First organization, which organized the Jan. 6th rally on the Ellipse park where Trump urged the crowd to “fight much harder” before the attack commenced on the Capitol.

They were also involved in the “March for Trump” bus tour on Nov. 14 and Dec. 12 that garnered attention and generated attendance for the Washington event.

In the letters sent Wednesday, Rep. Bennie Thompson, D-Miss., chairman of the committee, wrote that the committee has information stating they participated in organizing the Jan. 6 rally “in support of then-President Trump and his allegations of election fraud.”

The committee said it is seeking testimony and records in its search for information on the planning, organizing and funding of the rallies that proceeded the insurrection attempt when thousands of Trump supporters stormed the Capitol building on Jan. 6 as Congress was certifying Joe Biden as the 46th president of the United States.

The lawmakers also said they are seeking information on communications with or involvement of Trump administration officials and ally politicians concerning the events.

In the letters, Thompson wrote that members of the WFAF organizing the Jan. 6th rally “communicated with President Trump, White House officials, including Chief of Staff Mark Meadows, and others about the rally and other events planned to coincide with the certification of the 2020 Electoral College results.”

All those who received letters have until Oct. 13 to produce the requested documents and are to testify either later that month or in early November.

Thompson said in a statement that they are investigating the Jan. 6 attack that resulted in five people dead and some 140 police officers injured “in order to identify and evaluate lessons learned and to recommend to the House and its relevant committees corrective laws, policies, procedures rules or regulations.

“The inquiry includes examination of how various individuals and entities coordinated their activities leading up to the events of Jan. 6,” he said.

Rep. Jamie Raskin, D-Md., told CNN that they are trying to understand the relationships between the rally organizers, the White House and the insurrections who attacked the building, and the committee, for which he is a member, will use all the powers at its disposal to enforce the subpoenas.

He added that they will also work to disprove the notion that the attack was the result of a few bad actors.

“There was obviously a lot of coordination and planning that took place and we are going to reconstruct it,” he said. 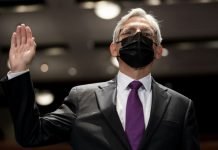