Delligatti, who said he came up with the idea for the Big Mac in 1965, died in his home in the Pittsburgh suburb of Fox Chapel on Monday while surrounded by family and friends, Ford said.

Delligatti’s family owns and operates 21 McDonald’s restaurants in western Pennsylvania, including the outlet where in 1967 he first served the Big Mac in Uniontown, about 40 miles south of Pittsburgh.

In 1968, McDonald’s put the Big Mac on its national menu. The hamburger is made up of two beef patties, the mildly tangy Big Mac sauce, lettuce, cheese, pickles and onions sandwiched between a three-layer sesame seed bun.

“Today, we celebrate the 98 inspirational years of Big Mac inventor, Michael ‘Jim’ Delligatti. Jim, we thank and will forever remember you,” McDonald’s said in a statement on Wednesday. 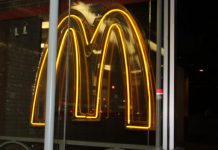