Aug. 9 (UPI) — Jerry Sheridan has secured the Republican nomination in the race for Maricopa County sheriff in Arizona, defeating Joe Arpaio in a bid to get his old job back.

The Arizona Republic reported that the results are not official, but there are fewer than 3,000 votes left to tabulate, making it impossible for Arpaio to make up the deficit of 6,000 votes needed to beat Sheridan.

Arpaio served as Maricopa County sheriff for 24 years, but lost his seat to Democrat Paul Penzone in 2016 and in 2018 came in last in a three-way race for the Republican nomination for U.S. Senate.

In 2017 Arpaio was convicted of criminal contempt of court for defying a judge’s order to halt racial and ethnic profiling.

President Donald Trump pardoned Arpaio, but a federal appeals court ruled in February that the conviction would stand but have “no legal consequences.”

Sheridan has worked in the sheriff’s office for 38 years. He will face Penzone, who ran unopposed, in the general election.

“Joe Arpaio did a great job for a long time,” Sheridan said. “He will never be irrelevant, but I think his political career is over.”

“They were tired of me and tired of my office,” Arpaio said. 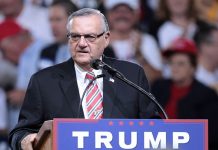 DOJ asks for case against Arpaio to be thrown out 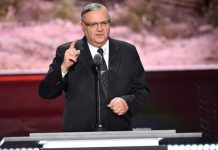