Trump denied the allegations, published by The Atlantic on Thursday, citing people with firsthand knowledge of the president disparaging veterans and the war dead. Other outlets later confirmed stories in the article.

“If what is written in The Atlantic is true, it’s disgusting,” Biden said Friday during an appearance near his Delaware home. “It affirms what most of us believe to be true: that Donald Trump is not fit to be commander in chief.”

“To think that I would make statements negative to our military and fallen heroes when nobody has done what I’ve done,” Trump told reporters. “It’s a total lie … it’s a disgrace.”

Citing unnamed sources, The Atlantic reported Trump has repeatedly spoken negatively about U.S. service members who have been killed, injured or captured in action. It described his his canceled visit to the Aisne-Marne American Cemetery in Paris in 2018, saying Trump chose not to make the trip because he didn’t want his hair to be ruined by the rain.

Speaking to senior staffers, he said, “Why should I go to that cemetery? It’s filled with losers,” referring to U.S. troops killed during World War I.

A year earlier, during a trip to Arlington National Cemetery to visit the grave of John Kelly’s son, Robert Kelly, Trump asked his former chief of staff, “I don’t get it. What was in it for them?” according to the article.

Kelly declined to comment for the article, but a friend of the four-star general told The Atlantic that Trump couldn’t understand why someone would join the military and risk their lives.

“He can’t fathom the idea of doing something for someone other than himself,” the source said. “He just thinks that anyone who does anything when there’s no direct personal gain to be had is a sucker. There’s no money in serving the nation.”

Beyond The Atlantic article, Trump has been on record disparaging U.S. service members for their decisions to serve. He described the late Sen. John McCain as a “loser” because he was captured during the Vietnam War, and used the same language to talk about how the late President George H.W. Bush was shot down as a Navy pilot during World War II.

He also got into a feud with Khizr and Ghazala Khan, the parents of U.S. Army Capt. Humayum Khan, who was killed in the Iraq War in 2004.

Speaking Friday to reporters, Khizr Khan said Trump had the soul “of a coward.”

“He is incapable of understanding service, valor and courage. His soul cannot conceive of integrity and honor.”

U.S. Sen Tammy Duckworth, D-Ill., a veteran who lost both her legs in Iraq, said The Atlantic article didn’t shock her but she is “appalled” by the allegations.

“I take my wheelchair and my titanium legs over Donald Trump’s supposed bone spurs any day,” she said, referring to Trump’s waiver to not serve in the Vietnam War.

Some military veterans and their families reacted to The Atlantic article by posting posting photos of themselves and loved ones in uniform on social media, some changing their profile pictures. 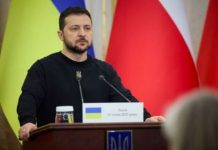