McCain is facing a conservative challenge from Kelli Ward, a physician and former state senator who resigned her seat to run against McCain in a GOP primary.

McCain, a mainstay of Arizona politics for more than three decades, is expected to prevail, but has had a somewhat rocky relationship with his own party base over the years due to his support of campaign finance reform and illegal immigration. On both issues, McCain has supported compromise legislation with Democrats that many conservatives oppose.

Should he prevail, McCain will face one of the toughest general election opponents of his career in Democratic Rep. Ann Kirkpatrick, a moderate Democrat who represents the state’s sprawling First District, which encompasses much of the rural eastern portion of the state.

Kirkpatrick does not have a challenger in Tuesday’s primary.

On the Democratic side, Tom O’Halleran, a former Republican state senator who switched parties, is expected to defeat Miguel Olivas.

Perhaps the most-watched primary of the night, however, involves a local sheriff’s race. Rarely does such a local contest generate national attention, unless the sheriff is Joe Arpaio, the lightning rod lawman from Maricopa County who has garnered national attention for his tough stance on illegal immigration. Arpaio faces a trio of challengers in the Republican primary in his quest for a seventh term.

The remainder of the congressional primaries being decided in Arizona are:

— In the state’s Second District. Two Democrats are vying for the chance to unseat first-term Rep. Martha McSally. The district is regarded as a toss-up in the general election, with McSally winning by fewer than 200 votes two years ago. Democrats Matt Heinz and Victoria Steele are on Tuesday’s ballot.

— The heavily Republican Fifth District is an open seat via retirement in the affluent Phoenix suburbs. Voters will choose between Christine Jones, Andy Biggs, Justin Olson and Don Stapley. 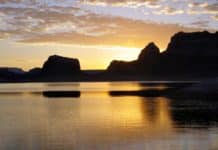