She detailed the allegations in a new book titled “What Do We Need Men For? A Modest Proposal,” which is scheduled for release July 2. New York magazine printed an excerpt from the book detailing her allegations against Trump and Moonves.

Carroll, 75, said both men attacked her in the 1990s, both in public locations.

She said then-real estate tycoon Trump approached her in 1995 or 1996 at Bergdorf Goodman department store in Manhattan. Recognizing each other, she said he asked her for help buying a gift for a woman. Trump was married to Marla Maples at the time.

Carroll said Trump followed her to a fitting room at the store, shoved her against a wall, pulled down her tights and, “forcing his fingers around my private area, thrusts his penis halfway — or completely, I’m not certain — inside me.”

Carroll said she told two friends about the alleged attack at the time, but didn’t contact police out of fear of death threats, and retribution from Trump. She said one friend warned her that Trump “has 200 lawyers.”

“He’ll bury you,” the friend said.

The other pushed her to go to police.

“‘He raped you,’ she kept repeating when I called her. ‘He raped you. Go to the police!'” Carroll wrote.

New York magazine said it confirmed the details with the two friends.

The White House denied the allegation from Carroll, the 16th woman to publicly accuse Trump of sexual misconduct.

“This is a completely false and unrealistic story surfacing 25 years after allegedly taking place and was created simply to make the president look bad,” a senior White House official said in a statement to New York magazine.

Later Friday, Trump issued a statement accusing Carroll of making up the allegations to try to sell her new book.

“It should be sold in the fiction section,” he said.

“Shame on those who make up false stories of assault to try to get publicity for themselves, or sell a book, or carry out a political agenda — like Julie Swetnick who falsely accused Justice Brett Kavanaugh. It’s just as bad for people to believe it, particularly when there is zero evidence.

Later in the 1990s, Carroll said, Moonves attacked her after she interviewed him at a hotel for an article in Esquire. She said he followed her to the elevator at the hotel and assaulted her.

“I don’t know how many apertures and openings you possess, Reader, but Moonves, with his arms squirming and poking and goosing and scooping and pricing and prodding and jabbing, is looking for fissures I don’t even know I own, and — by God! — I am not certain that even if I pull off one of his arms it won’t crawl after me and attack me in my hotel bed,” Carroll wrote, comparing him to an octopus.

A representative of Moonves’ said he “emphatically denies” Carroll’s account.

Moonves stepped down as head of CBS in September amid a number of sexual assault and harassment allegations. 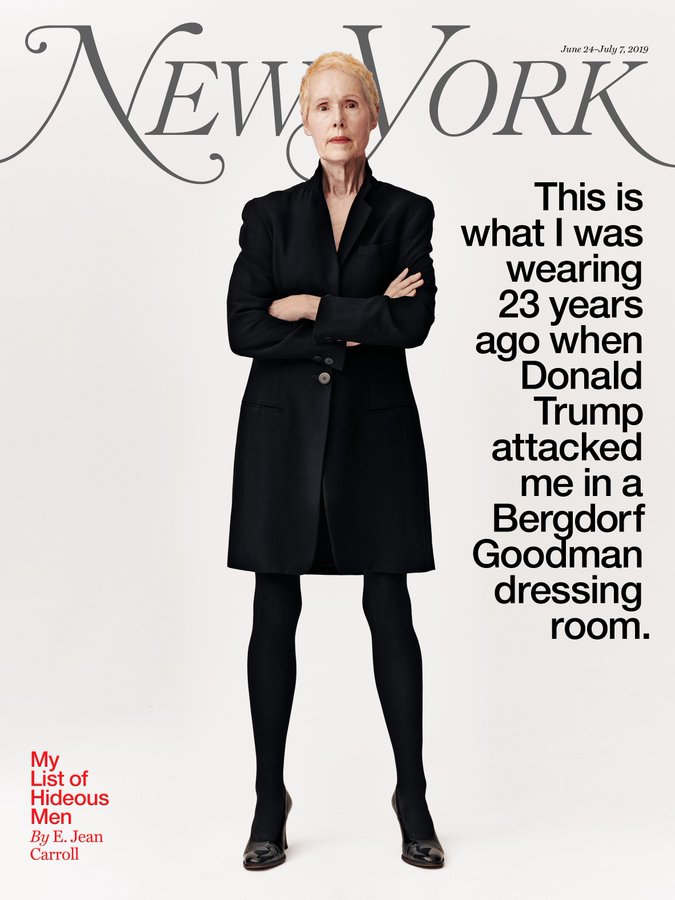 In next week’s cover story, E. Jean Carroll shares for the first time her violent encounter with Donald Trump. The coatdress she was wearing that day has hung in her closet ever since; she wore it again for the first time for her portrait with New York https://nym.ag/2Y4v0Sa