June 22 (UPI) — The Proud Boys seditious conspiracy trial stemming from the Jan. 6 capitol insurrection, scheduled for August, was delayed Wednesday by a federal judge. The DOJ joined defendants in requesting the delay.

Judge Timothy Kelly granted the delay during a hearing after several of the defendants asked for the delay, citing the ongoing work of the House Jan. 6 Committee.

The Department of Justice joined the defendants in requesting the delay.

“The government joins all defendants in urging this court to continue the trial,” prosecutors wrote in a court filing. “Moving the trial is necessary to avoid the potential constitutional and due process issues that have been presented in the parties’ filings, ” federal prosecutors said in the filing.

Proud Boys leader Enrique Tarrio and four others were indicted earlier this month on seditious conspiracy charges in the Jan. 6 attack on the U.S. Capitol by Trump supporters.

“Were the trial in this case not continued, the parties in this case could find themselves in the unprecedented position of litigating a criminal trial simultaneous to the release of a Congressional report that is likely to include robust descriptions of the defendants,” the DOJ court filing said.

Tarrio defense lawyers said in a memo that Tarrio believes that an impartial jury will never be achieved in Washington, D.C. They said Tarrio is innocent of all the accusations in the indictment and “justice delayed is justice denied.”

Court documents have detailed plans the Proud Boys allegedly had to disrupt the Jan. 6 certification of Joe Biden as the winner of the 2020 presidential election. 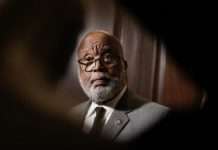 House panel pushes back next Jan. 6 hearing to Thursday due to ‘technical issues’