Aug. 27 (UPI) — A federal judge on Tuesday halted a Missouri abortion law that is one of the most restrictive in the country.

The law cannot take effect “pending litigation or further order of the court,” Sachs said in his 11-page opinion, obtained by CNN.

If not for the judge’s order, the new law would have gone into effect Wednesday, blocking abortion statewide after eight weeks of pregnancy even if there were rape or incest.

“However formulated, the legislation on its face conflicts with the Supreme Court ruling that neither legislative or judicial limits on abortion can be measured by specific weeks or development of a fetus; instead, ‘viability’ is the sole test for a state’s authority to prohibit abortions where there is no maternal health issue,” Sachs wrote.

The law would have penalized medical professionals who perform abortions after eight weeks with up to 15 years in prison even though the landmark 1973 Roe v. Wade abortion case set 24 weeks as the viability standard and many women do not know they are pregnant at eight weeks.

Missouri Gov. Mike Parson had signed the legislation into law in May.

The law would have prevented the “vast majority of patients from obtaining the constitutionally protected medical care they seek,” attorneys had argued.

However, the state argued that Planned Parenthood and the ACLU do not have standing to block the law because only women seeking abortions would be most affected.

The law includes bans on abortions at 14, 18, and 20 weeks if a court finds the eight-week ban invalid. 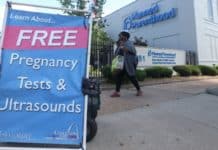