Feb. 9 (UPI) — Orange County Superior Court Judge Gregory Jones has decided to hold off on dropping charges against a California surgeon and his girlfriend accused of drugging and raping multiple women.

The judge said Friday he needed more knowledge of the case and evidence first after hearing alleged victims’ impact statements read in court. His decision shocked the defense team who expected the charges to be dropped as the Orange County District Attorney Todd Spitzer had requested Tuesday, citing lack of evidence.

“Still in shock, still can’t believe this has happened to us,” the Newport Beach surgeon Grant Robicheaux, 39, who appeared on Bravo’s Online Dating Rituals of the American Male said, referring to himself and his girlfriend, Cerissa Riley, 32.

The Orange County District Attorney back in September 2018, Tony Rackauckas, announced the initial charges. Spitzer replaced Rackauckas after winning November 2018 election. He suggested Rackauckas had delayed the charges for political effect during the election, noting that it had been two years since Newport Beach police received accusations in 2016 against the couple and eight months since a search of Robicheaux’s house.

The judge mentioned the role politics played in the case Friday.

“Politics have infected this case,” Jones said. “Mixing politics with prosecution gives you a toxic cocktail.”

The couple were initially charged with drugging and raping at least two women, and five more women came forward in October with charges of sexual assault, bringing the total to seven the couple allegedly met in local bars and festivals, getting them intoxicated and taking them home to be raped. They have both pleaded not guilty.

Rackauckas, who had held the position of Orange County District Attorney for nearly 20 years in 2018, said that investigators had more than 1,000 videos and photos of women in various states of consciousness on Robicheaux’s cellphone.

“It appears they are highly intoxicated beyond the ability to consent or resist, they are barely responsive to the defendants’ sexual advances,” Rackauckas said at the time.

On the contrary, Spitzer said there was no evidence of non-consensual sex in the seized videos.

Still, Rauckauckas said that he believes the criminal case is strong.

“It’s not about video evidence or politics,” Rauckauckas said. “Think about what’s being dismissed here — the testimony of seven different victims. To throw that out based on the claim that the statement about the videos was exaggerated does not make any sense.” 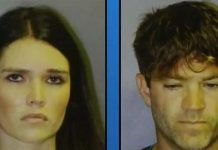