Jan. 5 (UPI) — A federal judge on Tuesday appeared to thwart a slew of arguments by the defense of Prince Andrew seeking to dismiss a lawsuit by a woman who says the Duke of York raped her when she was a minor, saying he would decide whether the case will proceed “pretty soon.”

The woman, Virginia Giuffre — who is one of the most prominent accusers of the late disgraced financier Jeffrey Epstein — filed the lawsuit against Queen Elizabeth II’s son in August, accusing him of sexually assaulting her on at least three separate occasions in the United States and Britain when she was 17 years old.

Giuffre argues that Epstein, who died by suicide while awaiting trial on federal sex abuse charges in 2019, arranged for her to have sex with the Duke of York.

Prince Andrew has denied the allegations, and his lawyer, Andrew Brettler, on Tuesday argued for U.S. District Judge Lewis Kaplan to throw the case out as Giuffre failed to “articulate what happened to her,” NBC News reported.

Brettler stated that for the case to proceed Giuffre further needs to detail specifics about the location and date of when she says she was abused by his client — an argument that Kaplan seemingly brushed aside.

“With all due respect, Mr. Brettler, that is not a dog that’s going to hunt here. I’ll tell you that straight out, right now. It’s not going to happen,” Kaplan said.

Prince Andrew has also sought to have the case dismissed as Giuffre in 2009 had reached a $500,000 settlement in a similar case against Epstein. The Duke of York’s defense claims that the wording in the case clears their client of liability.

The settlement, which was unsealed in the U.S. District Court in New York on Monday, states that “second parties” who could have been included as a “potential defendant” are acquitted from potential future legal actions pursued by Giuffre.

Andrew’s defense on Tuesday argued that their client could have been a potential defendant involved in that initial case, Business Insider reported.

“I think it’s unquestionable that Prince Andrew could have been sued in the 2009 Florida action,” Brettler said, to which Kaplan disagreed.

“The real question is what did she have in mind, and what did [Epstein have in mind, if anything, in referring to other persons who could have been included,” Kaplan said.

Prince Andrew’s defense has for weeks attempted to have Kaplan dismiss the case, stating Guiffre was over the state’s legal age of consent when she says the abuse occurred and late last month that there is a jurisdiction issue as she lives in Australia.

Kaplan said he would decide “pretty soon” if the case will be allowed to proceed. 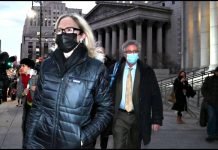