April 24 (UPI) — A South Florida judge on Tuesday ruled a video of New England Patriots owner Robert Kraft’s visit to a massage parlor won’t be released until after his solicitation case is adjudicated.

The ruling came after the office of Palm Beach County State Attorney Dave Aronberg last week said it planned to publicly release the video of Kraft and 24 other men accused of paying for sex at the spa. Kraft’s lawyers filed an emergency motion to stop the public release of the video, which they described as pornographic.

Palm Beach County Judge Leonard Hanser said releasing the video before the resolution of Kraft’s trial could unfairly influence the proceedings. He also said the video could be evidence central to the case.

“The case has drawn extraordinary media attention and it is not because of the nature of the alleged crime,” Hanser wrote. “Rather, it is because defendant is who he is.”

Kraft, 77, is accused of soliciting a prostitute on at least two occasions at a massage parlor in Jupiter, Fla., earlier this year. Officials said the encounters occurred at the Orchids of Asia Day Spa, about 80 miles north of Miami. He has denied wrongdoing.

Police had a warrant to place the business under video surveillance, and authorities say video evidence of Kraft’s two visits is in the hands of prosecutors.

Last week, Kraft’s lawyer said video evidence against his client should be kept from public view because his right to privacy should be held in higher regard than whatever “prurient interest” the public might have in seeing the videos.

“If the affidavit says what happened, what is the interest the public has in seeing it? It’s basically pornography,” Kraft’s lawyer, William Burck, said.

Aronberg’s office said it must release videos purporting to show illegal acts at the space because of Florida’s open-records laws.

Also Tuesday, Florida prosecutors charged 58-year-old Shen Mingbi as one of two women sexually involved with Kraft for pay. She was released on $5,000 bond.

Mingbi and another woman, Lei Wang, each allegedly received $100 for sexually servicing Kraft on Jan. 19.

Kraft pleaded not guilty to a misdemeanor solicitation charge and requested a jury trial in Florida. If convicted, he faces up to one year in jail, a $5,000 fine and 100 hours of community service. 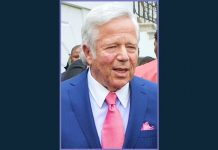 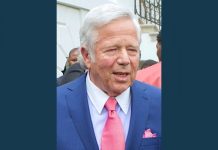 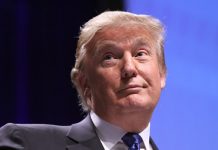