March 7 (UPI) — Three New York men were released from prison Friday after a judge declared they were wrongfully convicted of two murders nearly 25 years ago.

George Bell, Rohan Bolt and Gary Johnson were arrested and later convicted in connection with the 1996 shooting deaths of New York police officer Charles Davis and another man, Ira Epstein, whose check-cashing business was robbed.

Then-Mayor Rudolph Giuliani heralded the arrest and vowed swift justice in the killings.

But this week Queens County Supreme Court Judge Joseph Zayas ruled that the prosecutors who secured their convictions had suppressed information suggesting others may have committed the crimes.

The men’s convictions were vacated after the Queens District Attorney’s Conviction Integrity Unit conducted an investigation that spanned 11 months and in which more than 30 witnesses were interviewed.

Bell and Johnson, who were 19 and 22 respectively, both confessed to the crimes, but attorneys this week filed motions saying their statements “bear all the hallmarks of the false confessions that resulted in wrongful convictions in the past.”

Attorneys argued, for example, that Bell’s confession was “riddled with inconsistencies and inaccuracies, a product of the fact that its details were fed to him by detectives who were working with incomplete and faulty information.”

At the time, Bell worked at Old Navy and Johnson worked as a store clerk.

Neither man knew Bolt, their alleged accomplice in the botched robbery.

During its investigation, the DA’s office turned up documents indicating that a member of the “Speedsick” gang implicated himself and other gang members in the robbery and killings.

Investigators also determined that while defense attorneys made several specific requests for information relating to the involvement of gang members in the check cashing robbery and shootings, they never received them.

But investigators did find those documents in files related to the unrelated prosecutions of those gang members.

“These prosecutors did not intentionally mislead the Court, but we cannot ignore the fundamental unfairness in which key exculpatory evidence never came to light during the trial. The constitutional safeguards in our criminal justice system failed here, and the result has deprived everyone involved of the certainty and finality of justice in this case,” CIU Director Bryce Benjet said in a statement from the DA’s office.

“After I was convicted for capital murder, I couldn’t fathom or wrap my mind around how God would allow the justice system I believed in to fail me in such a tragic fashion,” Bell said via video from Green Haven Correctional Facility, a maximum-security prison north of New York City, where all three men thanked those who worked to free them. 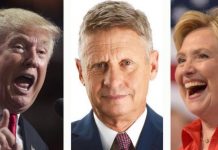 On the issues: Americans want jobs, how would Clinton, Trump create them?