The guilty verdict — of both first-degree and second-degree manslaughter — came after 27 hours of deliberations that began Monday.

She was an officer in the Brooklyn Center Police Department on April 11 when she and an officer trainee pulled Wright over for an expired registration on his vehicle and an air freshener hanging from his rearview mirror.

The other officer, Anthony Luckey, attempted to arrest Wright on an outstanding firearms warrant, at which point Wright attempted to re-enter his vehicle. Potter yelled “Taser, Taser, Taser,” and shot Wright with her firearm.

Potter pleaded not guilty to the charges, saying that she thought she’d pulled her stun gun.

The jury had been in deliberations since Monday and on Tuesday after Judge Regina Chu what they should do if they’re unable to reach a consensus on a verdict.

Chu sent the jurors back to deliberations after rereading earlier instruction that they should “deliberate with a view toward reaching agreement if you can do so without violating your individual judgment.” 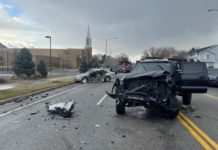