Nov. 3 (UPI) — The American Civil Liberties Union misled the government in the high-profile case of an undocumented immigrant who had an abortion in Texas last month, the Justice Department said in a Supreme Court petition Friday.

The Justice Department said the federal government was not properly informed in the procedural steps that are required in such a case.

The mother, a 17-year-old immigrant from Central America identified as Jane Doe, was apprehended at the Texas border in early September and placed in federal custody. Informed she was pregnant during a medical exam, she requested an abortion.

A judge granted her request, which was then refused by the government. The teen ultimately prevailed in a lawsuit in Washington, D.C., District Court on Oct. 13, which ordered the government to facilitate in the abortion.

The government was given 11 days to find an appropriate sponsor to take custody of Doe. The case was later heard with appellate judges giving consent.

The Justice Department’s petition says Doe’s representatives said the girl’s counseling appointment would occur Oct. 25 and the abortion on the 26th. The department said it planned to file a motion on the 25th to stay the abortion, but then learned that the procedure went ahead that day.

“At that point, by their own account, Ms. Doe’s representatives did three things: they secured the services of Ms. Doe’s original physician, moved her appointment from 7:30 to 4:15 a.m. on the morning of Oct. 25, and changed the appointment from counseling to an abortion,” the petition alleges. “They did not inform the government of the other two developments.”

The petition asks for an investigation of whether ACLU attorneys should be disciplined.

The ACLU said Friday it’s the government’s fault it didn’t file a legal challenge in time.

“The Trump administration blocked Jane Doe from getting constitutionally protected care for a month and subjected her to illegal obstruction, coercion, and shaming as she waited,” ACLU Legal Director David Cole said. “After the courts cleared the way for her to get her abortion, it was the ACLU’s job as her lawyers to see that she wasn’t delayed any further — not to give the government another chance to stand in her way.

“That government lawyers failed to seek judicial review quickly enough is their fault, not ours.” 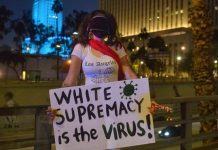